“Shan Hanifa is that rarest of beings: a truly original cook. No one else is Ireland cooks like Sham Hanifa. Who else uses turmeric in a potato gratin? Who else puts soya and chilli with Friendly Farmer chicken? Who dares to put star anise with poached rhubarb? Who has the confidence to put hoi sin and sesame in a glaze with Thornhill duck? Using the lessons of his Malaysian grandmother and his work in the West, Mr Hanifa has birthed something completely original in the beautiful space of The Cottage, his benchmark destination in County Leitrim.
There is a defining precision and cool temperament underlying his work, which you will discover also in his splendid range of sauces. But it’s the food on the plate, with its artfulness and its truly thought-through philosophy that explains Mr Hanifa’s enduring success in Jamestown, and his growing reputation nationally as a most singular chef.” (Review by John and Sally McKenna’s Guide)

“Conor and Ronan’s Maher’s Oarsman bar and restaurant is such a part of the culinary fabric of the North West that it is easy to overlook what a groundbreaking operation the brothers created when they first opened the doors of this handsome town centre bar. Their ability to deliver first-class food, further distinguished by first-class service, in a provincial bar was unheard of back in the early 2000s. It was as if the brothers imported a restaurant sensibility into the basic operation of their gorgeous bar, so even their simplest food served in the bar was characterised by inspired sourcing, great menu writing, and an assured, contemporary style of cooking that has only improved with the passing of time. Almost fifteen years after opening, The Oarsman remains ambitious, devoted and dynamic, and a pivotal destination for food lovers.” ((Review by John and Sally McKenna’s Guide)

Piero Melis is an outstanding chef, and his dishes offer definitive examples of thrilling Irish and Italian specialities.
Unique. Interesting. Memorable.  That’s how people describe Piero Melis’s cooking in The Courthouse. Mr Melis is the kind of cook who makes certain that every dish is vibrant with flavour, and it makes for great eating. There are several signature dishes that are outstanding: Mullaghmore lobster pappardella with light korma and basil sauce; superb home-made duck ravioli with white ragu; beautiful john dory with mascarpone and crab sauce; the sublime veal saltimbocca with mozzarella, Parma ham and a white wine sauce. The food is gracious, subtle and sublime, and great value for money. To make the most of the evening, stay upstairs in the simple rooms, and enjoy the Iselis wines from Mr Melis’s Sardinia. (John and Sally McKennas’ Guides) 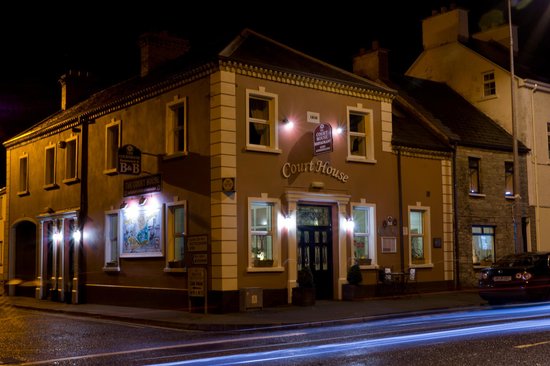 “The MacNean made its debut in the 100 Best Restaurants more than twenty years ago, when young Neven Maguire had just started cooking alongside his mother, Vera. He quickly made a reputation as an outstanding pastry chef, succeeded his Mum in the kitchen, and the rest, as we know, is history. Today the MacNean/Maguire brand is the best-known food brand in Ireland, and Mr Maguire’s life is a whirlwind of demos, cookery schools, books, blogs, telly programmes, radio appearances, and award ceremonies. But the core of his brand remains the splendid food his crack team produces in little Blacklion, modern Irish country cooking that stays true to the foods that made his name – Lough Erne lamb rump; blade of beef; Thornhill duck; prawn cocktail; Castletownbere scallops; chocolate sensation.” (John and Sally McKennas’ Guides)

“It’s become a commonplace for friends to tell you that the meal they ate in VM restaurant, in Longford’s Viewmount House, was “the best meal of the year”. Gary O’Hanlon is the chef currently having The Moment – loved by his customers, loved by the media, and firing out food that is unarguably convincing. He likes to have the flavours coming at you from all directions, so salmon will be cured with beetroot, Castlemine Farm pork shoulder is cooked en crepinette and served with piccalilli and sage oil; 48 hour featherblade of beef will have the added whumpf! of Courvoisier in a peppercorn sauce; Italian meringue is scorched and comes with white chocolate ice cream. Beryl and James Kearney and their team mind everyone who comes to this handsome room, and it’s the star of Longford. (John and Sally McKennas’ Guides)